jessefelder October 18, 2011
Over the weekend I tweeted:

At the time I was thinking about Occupy Wall Street. I was just wondering how many of those folks that are pissed off at Wall Street just never learned how to manage their own personal finances. Maybe they got behind the 8-ball to some financial institution for one reason or another, fully came to realize their predicament and are pissed off about it.

Don’t get me wrong; there are many reasons I sympathize with the Occupy crowd. I’m the last person that would defend Wall Street’s crimes but I came across this on Facebook and it got me thinking about all of this: 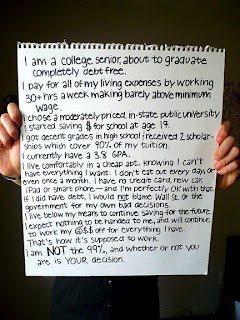 Clearly this is someone who knows how to keep Wall Street greed at bay in his/her own life. So where did this person learn to live this way? Not in school. Hence my tweet but why didn’t they learn it in school?

Sure seems like something that should be taught then as it will be integral to some of the most important decisions you will make in your life after school. And it wouldn’t take much at all, really. A reading list including “The Richest Man in Babylon,” instruction in the power of compound interest, balancing a check book, monitoring your expenditures versus savings, etc. would do the trick.

However… it occurs to me that this might be against our nation’s culture. America is the most consumerist nation in the world. The following interactive graphic is a bit dated but still relevant. It demonstrates this point well. In nearly every category of discretionary spending, Americans lead the way. 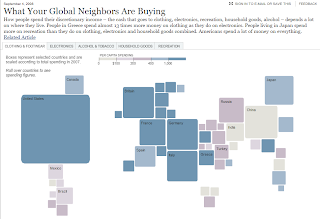 Before you respond by saying, ‘We’re the wealthiest nation in the world. Of course we spend the most!’ know that we also have the lowest savings rate in the world, as the next graphic shows: 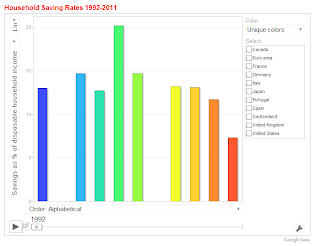 So it also occurs to me that there must be some underlying factor at work here.

I recently touched upon the fact that our current tax system encourages consumption and discourages savings and investment by taxing the latter much heavier than the former (make more money/pay more taxes – spend more money/pay less taxes via deductions). This is an incentive Americans can’t ignore. But where did it come from and who sustains it?

Take a quick look at the Fortune 500. Maybe, just maybe our largest, most powerful corporations have something to do with it: Wal-Mart, Exxon Mobil, General Motors, Bank of America, Citigroup and Proctor & Gamble, for example?

Clearly these companies are motivated to create more and more spending. For some, they want you to buy more of their goods. For the financial institutions, yes, they may make money from your saving and investing activities but they make far, far more money when you borrow money from them, especially these days.

B of A, Citigroup and Wells Fargo can currently borrow money from the Fed at 0% and lend it to you on your credit card at 20%+. Or they can borrow money from you (in your savings account or CDs, etc.) at multiples of their cost at the fed and lend it out in the form of mortgages paying them 4% when they don’t default. Which sounds more lucrative?

For the financial industry, it’s clearly very attractive to have consumers overspending on their credit cards and then paying astronomical interest rates. It follows then that it’s in their interest to have customers that don’t quite understand that the “Eighth Wonder of the World” is working for the banks and against them in this relationship.

I come to two conclusions here. First, we probably won’t see the tax code change anytime soon or personal finance taught in public schools. Those two things are just not of interest to our country’s most powerful companies.

Second, maybe doing what that college kid who created the poster did is the most effective form of protesting a system that’s not in our best interest. Shun debt, control your spending and invest in exactly that which makes the most sense for YOU in the long run. Do this as a nation and I can’t think of a purer form of democracy.