Just over a week ago I took the other side of Business Insider’s “The Scariest Jobs Chart Ever.” Today it looks like recent Gallup Polls are backing up my more optimistic take. 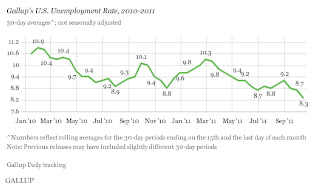 REAL ESTATE
This is another area that signals the economy may not be as bad as consumers currently think it is. Housing inventories are shrinking to levels not seen in years and prices are stabilizing or rising in some areas as a result.

Jim the Realtor, one of the few sober voices in the real estate market in recent years, reports that the San Diego real estate is “abuzz. Action is incredible.”
San Diego has led the national market in the recent past and may be a decent indicator of what this decreasing inventory may lead to in the larger marketplace.
RAIL & SHIPPING TRAFFIC
Rail traffic appears to be picking up suggesting economic activity is increasingly looking healthy. September saw the 12th highest intermodal (using shipping containers) volume on record and the highest since late September of 2007. 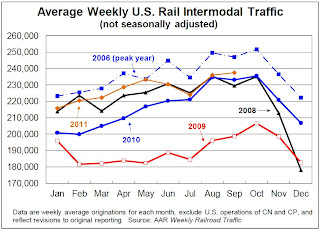 On the shipping front, the Baltic Dry Index, a key measure of global shipping demand used by economists as a leading indicator, has now risen over 70% over the past two months and over 100% since its February lows.

All in all, things may be looking up for the economy in the near future. Still, I’m prepared for some continued volatility.
Uncategorized No Comments
Next Post