It’s now been a couple of weeks (and almost 1,000 points on the Dow) since I wrote “Cheapest Stock Market in Decades.” Obviously, stocks are even cheaper today.

I found a few more charts that show how rare the current valuation situation really is. Below is a chart from JP Morgan (HT, Dave) that shows the price-to-book value of the S&P 500. By this measure, stocks haven’t been this cheap in over 20 years. 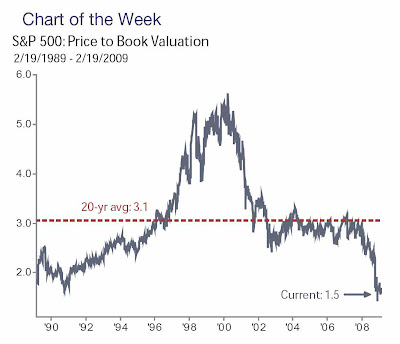 This next chart (HT, Barry) shows that this is only the third time in history stocks have made a new 12-year low. The last occurrence marked THE low of the epic 1973-74 bear market.

This last chart is an update of one I posted a couple of weeks ago. As of yesterday’s close stocks are cheaper than any time since 1983, just after the birth of the last major bull market.