Berkshire Hathaway released its 2008 Chairman’s, aka Warren Buffett’s, Letter to Shareholders over the weekend (read it here). The press immediately tagged it as, “Buffett’s worst year,” as the company suffered its largest drop in per-share book value since Buffett took the helm in 1965. 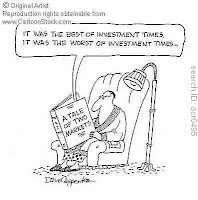 By any other measure, however, 2008 could be considered Berkshire Hathaway’s best year ever. The company’s 9.6% decline in book value was 27.4% better than the 37% decline in the S&P 500. Many of the company’s closest competitors, AIG for example (HT, @nosredna), are now a mere shadow of their former selves. As a result, Berkshire is now the largest financial company in the United States, by far.

If this financial crisis has demonstrated the “age of foolishness” that the real estate and banking industries have endured over the past decade or so then Berkshire’s relative success demonstrates the “age of wisdom” it has witnessed since Buffett took over.

Here are a few of the highlights from the letter:

1) “The credit crisis, coupled with tumbling home and stock prices, produced a paralyzing fear that engulfed the country. A freefall in business activity ensued, accelerating at a pace that I have never before witnessed.”

2) “The disarray in markets gave us a tailwind in our purchases. When investing, pessimism is your friend, euphoria the enemy…. Whether we’re talking about socks or stocks, I like buying quality merchandise when it is marked down.”

3) “I in no way anticipated the dramatic fall in energy prices that occurred in the last half of the year. I still believe the odds are good that oil sells far higher in the future than the current $40-$50 price. But so far I have been dead wrong.”

4) “When the financial history of this decade is written, it will surely speak of the Internet bubble of the late 1990s and the housing bubble of the early 2000s. But the U.S. Treasury bond bubble of late 2008 may be regarded as almost equally extraordinary.”

5) “Approval… is not the goal of investing. In fact, approval is often counter-productive because it sedates the brain and makes it less receptive to new facts or a re-examination of conclusions formed earlier. Beware the investment activity that produces applause; the great moves are usually greeted by yawns.”

By far the most interesting revelation I have seen regarding the letter was discovered by Jeff Matthews: Berkshire’s equity portfolio has now returned to its cost basis.

“What does that mean?” you ask. It means any investor today can essentially replicate Berkshire Hathway’s investment portfolio of common stocks and pay the same average price Buffett paid. I don’t think there has ever been another time since he took over as Chairman when this was possible.

This Just In: Berkshire Equity Portfolio Back to its Cost Basis
Jeff Matthews
Jeff Matthews Is Not Making This Up
February 28, 2009