Cascade Bancorp on the Brink

Back in November I wrote a piece titled “CACB Turning the Corner?” At the time, Cascade Bancorp’s financials looked to be improving.

However, the company subsequently announced that they had mistakenly calculated their loan loss provisions resulting in greater losses than they had initially disclosed. That might have been a hint that things weren’t going as well as they seemed at the end of the third quarter.

Last week the company announced results for the final quarter and full year of 2009. Below are a few of the highlights.

-Bad news: The company can no longer afford to pay a dividend (obvious).

-Good news: Deposits once again grew from the prior quarter, albeit at a slower rate (I think I can; I think I can).

The bottom line is things are getting pretty dicey for old CACB. It won’t be pretty if the bank continues to sustain these kind of losses in their loan portfolio. Investors obviously thought the bad news outweighed the good news and sold the stock off pretty hard yesterday. 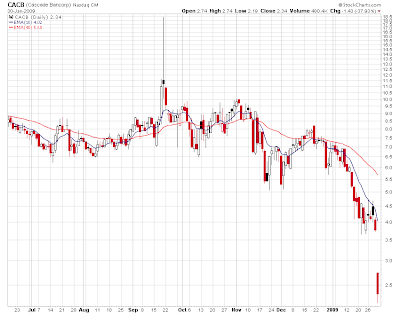 The company may survive this real estate depression; I hope it does. However, there is now a very real possibility it may not. The action in the stock price is certainly far from encouraging (it’s less than a bottle of “two buck chuck”!!!). I don’t even want to think about the implications for the local economy.

The company has applied for government assistance via the TARP and this would definitely help them maintain minimum capital requirements. And if the company were able to sell assets above fair market value to the proposed “bad bank” that would also go a long way towards restoring the company’s balance sheet.

The bottom line, however, is Bank of the Cascades loaned way too much money to builders blinded by the biggest real estate bubble in history and is now paying the price. What the final tab will ultimately be is anyone’s guess.