“The reports of my death have been greatly exaggerated.” -Mark Twain

Doug Kass, a widely respected hedge fund manager and trader, penned an article last November titled, “Warren Buffett has lost his groove.” Today he published a follow up: “Is this the end of Warren Buffett?” In it he writes, “Buffett’s salad days seem to be over; the only question that remains is the timing and to what degree investors will abandon the Oracle of Omaha…. There is no apparent end to the decline [in Berkshire Hathaway’s share price and, hence, Warren’s standing] in sight.” 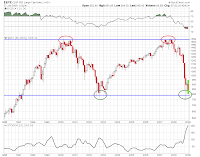 At the time of Kass’ earlier article, I wrote that I believed Warren’s bad press to be a very good contrarian indicator. I still believe this to be the case and stocks, ironically enough, are still above their lows of last November. It seem to me, however, there is even a deeper contrarian signal at work here.

“When your method becomes popular, switch to an unpopular method.” -John Templeton

If nothing else, Warren Buffett is the apotheosis of the “buy and hold” investment philosophy and is there any more unpopular method than “buy and hold” right now? For the past ten years “buy and hold” has profited its practitioners literally not at all. 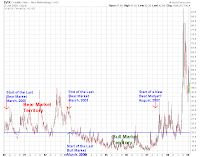 Everywhere traders and short sellers are celebrating the once-in-a-generation volatility, chanting “trade ’em; don’t marry ’em” and “buy and hold is dead.” I have met more people in the past few months that want to learn to trade for a living than I did back in day-trading’s late 1990’s heyday. Trading is (once again) the new, new thing.

I believe traders would be wise to consider the late, great Mr. Templeton’s sage advice. Once-in-a-generation volatility doesn’t mean increased volatility that will last a generation. I believe it’s much more likely that volatility will soon revert to its mean – which means stocks will rally. In which case, “buy and hold” investors will be best rewarded for taking what looks to be a very contrary stand today. Hell, isn’t that exactly how both Mr. Buffett and Mr. Templeton earned their fortunes in the first place?

Is This the End of Warren Buffett?
Doug Kass
TheStreet.com
January 27, 2009

The Death of Wall Street and Its Most Famous Icon
Jesse Felder
My Back Pages
November 13, 2008

Links, Lyrics and Laughs: “Hits From The Bong”

Links, Lyrics and Laughs: “Hits From The Bong”