Last month, it staged a breakout attempt above last summer’s highs but was soundly rejected: 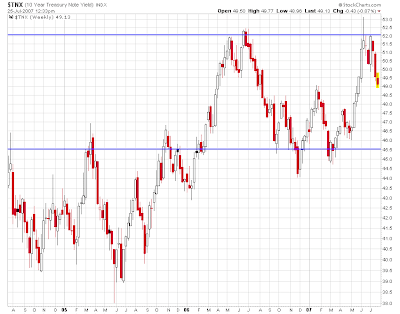 With the recent drop in rates, the yield has returned to its long-term downtrend channel:

The obvious question is, “was the recent runup in rates merely a whipsaw or will they finally break their multi-decade downtrend?”

In my mind, this is the key question. The only reason rates would go much lower is if we saw a significant economic slowdown (aka, recession again bordering on deflation), a prospect most people abhor.

On the other hand, if rates were to convincingly breakout the most likely cause would be that foreign central banks became sated with our debt and significantly slowed their buying (the speculated cause of the recent bond selloff).

However, a renewed rise in rates would surely exacerbate the decline in the already foundering mortgage and real estate markets. It would also make every alternative asset class inherently less attractive (can you say, “synchronous bear markets?”) not to mention the cost to the country of calling the the world’s reserve currency (our beloved greenback) into question.

This is why I continue to believe most of us should be rooting for a recession.
LIV

The MAC D(AD)dy of Technical Indicators

The MAC D(AD)dy of Technical Indicators