Casade Bancorp and the Ironies of Investing

Back in March I reviewed Cascade Bancorp’s annual report in a piece titled, “Credit Quality Cascading at Bend’s CACB.” After reviewing the company’s recently-released quarterly report it’s safe to safe to say that the cascading loan portfolio is dramatically worsening.

From September 30 to December 31, 2006, non-performing assets (delinquent loans) grew from $1.8 million to $3.0 million. In the latest quarter ending March 31, 2007, NPA ballooned again to $7.7 million. This is an annualized growth rate percentage in the thousands.

Bottom line: The fastest growth the company now reports, parabolic growth in fact, is in the deterioration of its core business.

Ironically, however, it looks as if the stock has already priced the bad news in for now and is primed for at least a bounce: 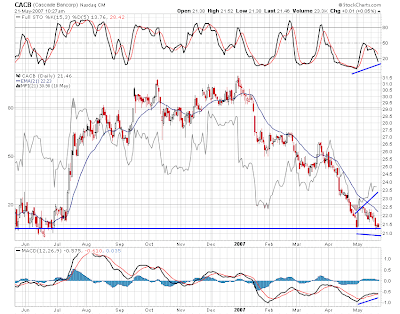 Ah, the vagaries of volatility; the ironies of investing.
LIV