The Stuff That Bubbles Are Made Of 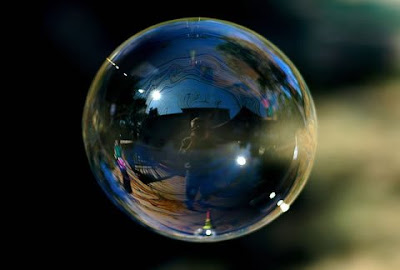 The Fianancial Times ran a fascinating story over the weekend detailing two economic theories behind the creation of asset bubbles. The first, promulgated by Hyman Minsky, relates to real estate investors:

Minsky classifies investors in three categories. The first are hedge investors, not to be confused with modern hedge funds. Minsky’s hedge investors are risk-averse, and can meet their payment obligations out of current cash flows; the second category are speculative investors, who can do the same in the long run, but not necessarily in the short run. The third are Ponzi investors, named after Charles Ponzi, one of the most notorious swindlers in US history, who lived in the early 20th century. A Ponzi investor is someone who takes on new debt to meet current obligations, and hopes to finance the ever-rising debt through higher asset prices. (If you have an interest-only mortgage, then I am sorry to say you are in that category.) The critical part of Minsky’s theory is that during an economic boom, an increasing number of investors gradually move from the first category to the second and third. In a Minsky economy, instability is not due to some external shock, but is inherent in the system itself.

The latest data show that there has been an enormous surge in, “Ponzi investors,” over the past few years. Bloomberg reports that the number of so-called, “liar loans,” grew nearly ten-fold over the past 5 years, from $30 billion in 2001 to $276 billion last year. These real estate investors (all buyers are classified as investors for economic purposes) lied about their income in order to qualify for homes they couldn’t otherwise afford. They are proof of the Minsky theory and have indeed added a great degree of, “instability,” to the mortgage market by perpetrating over $1 billion of fraud last year alone in addition to defaulting on loans the value of which is many multiples greater.

The second theory the FT article discusses relates to the creditors who enable these “ponzi investors.” Raghuram Rajan, former director of research at the International Monetary Fund, suggests that:

Investors, eager to outperform the markets, take on two different types of risk during a boom. The first is a so-called “tail risk”, the kind of risk that caused the default of Long Term Capital Management almost 10 years ago. These are high risks with a very low probability of occurring, which offer high rewards. The second risk is herd behaviour, as investment managers do not want to underperform their competitors. Mr Rajan says these two risks reinforce each other. During an asset price boom, investors are eager to take on the low probability tail risks, in the knowledge that others do the same. If the crash comes, they have at least not underperformed their competitors. Mr Rajan provides a chilling conclusion: “Even though there are far more participants today able to absorb risk, the financial risks that are being created by the system are indeed greater . . . It is possible these developments may create more financial-sector-induced pro-cyclicality than the past. They may also create a greater (albeit still small) probability of a catastrophic meltdown.”

The evidence of the increase in, “tail risk,” in the real estate bubble is simply creditors willingness to fund the obscene growth in the amount of, “liar loans,” and other exotic products. These loans obviously have a much greater potential for trouble than traditional prime loans and have become a much greater percentage of banks’ and bond investors portfolios. Subprime and Alt-A financing recently surpassed prime as the largest segment of the mortgage market according to Credit Suisse.

Demonstrating the banks’ overzealous pursuit of, “tail risk,” the Washington Post reports that the Appraisal Institute, a 22,000-member group of real estate appraisers, recently accused lenders of, “‘systematic inattention’ to the accuracy and the sources of the valuations backing the mortgages they funded.” Lenders have not only ignored the growing trend of mortgage fruad they have ignored a simultaneous boom in appraisal fruad in their quest to fund ever greater volumes of exotic loans.

The growth of these types loans is due to the popularity of securitization as much as it is due to lender complacency. CDO (mortgage pools) sales reached nearly half-a-trillion dollars last year having increased nearly 6-fold over the past 5 years. The banks eagerness to fund exotic loans along with bond investors eagerness to purchase them demonstrates their collective, “herding mentality,” in taking in increasing, “tail risk.”

The proliferation of, “Ponzi investors,” funded by overzealous creditors has without a doubt increased systemic risk that Minsky argues is, “inherent in the systen itself.” These risks are beginning to manifest in the credit market.

This crash has been hidden from public view due to the opaque nature of the mortgage market. “Because of the way mortgages are packaged into pools and sold to investors, it is still not clear who owns the faltering loans and how much money has been lost,” writes Gretchen Morgenson for the New York Times. “This episode seems to be unfolding in slow motion. We may not know who they are. But they do.” With the losses piling up, I’m guessing we will soon find out.

CDO investors bought up the products comforted by the diversity in owning thousands of pieces of different mortgages. But there isn’t much difference in owning a handful of bad loans or a plethora of pieces of them. The FT article concludes, “What masquerades as the sharing of risk is in fact a system malfunctioning, with the potential to undermine the integrity of the financial system.” I’ll say.
LIV

Have a Coke and a Smile

Have a Coke and a Smile