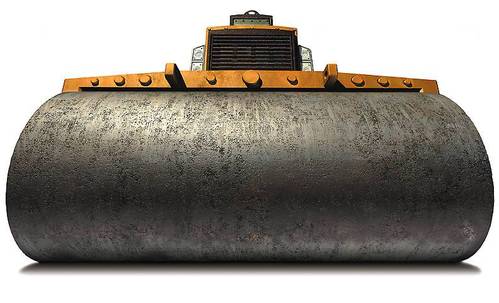 ‘What is the opposite of a “margin of safety”?’ This is a question I’ve been considering because it seems that’s exactly what investors have settled for in passively buying equities today. But first we should probably define “margin of safety” before we can begin to understand its opposite.

Ben Graham famously wrote in The Intelligent Investor, “Confronted with a challenge to distill the secret of sound investment into three words, we venture the motto, MARGIN OF SAFETY.” Here we have Warren Buffett’s mentor telling us these are the three most important words in investing. So what do they mean?

Well, Buffett explains it like this: “When you build a bridge, you insist it can carry 30,000 pounds, but you only drive 10,000 pound trucks across it. And that same principle works in investing.” When you buy a stock, you estimate its intrinsic value and then try to buy it at a discount that allows for a possible error in judgement or some unforeseen, adverse development.

In this case, if things go wrong the discount you demand helps protect your principal. For example, say you evaluate a company is worth $40 per share and end up buying it at $20. If it turns out it’s really only worth $20 you didn’t, in fact, risk very much.

But demanding a “margin of safety” is not only interesting from the risk side of the equation. It also offers greater potential reward. If it turns out the company whose stock you bought for $20 is, in fact, worth $40 and the market comes around to your view then you just generated a 100% return before you even began.

The point here is that the “margin of safety” concept throws the traditional relationships between risk and reward out the window. The idea that you have to take greater risk in order to achieve greater return is not valid in the eyes of those who believe in Ben Graham’s teaching. In fact, it’s just the opposite. The greater “margin of safety” you are able to demand, the less risk you assume and the greater potential reward you stand to reap.

Imagine that $40 company can be bought for just $10 in the open market. A 75% discount to intrinsic value affords a greater “margin of safety” than the 50% discount we discussed earlier. Thus we are taking even less risk. And if our analysis proves valid once the market realizes this fact we stand to generate a 300% return rather than just 100%.

So now that we have covered what “margin of safety” means let’s think about that bridge analogy again. If it is built to support 30,000 pounds it’s no problem to run 10,000 pound trucks. However, if we start running 30,000 or even 40,000 pounds on it regularly we might have a problem. The same goes for paying above intrinsic value for a stock.

But it’s even more troublesome than that because of the second attribute related to the “margin of safety” concept. Not only are we taking more risk by eliminating our margin for error we are also reducing our potential rate of return. In fact, the higher the price we pay the greater the risk we take AND the lower return we can achieve.

Considering the price-to-sales ratio for the median stock in the S&P 500 is higher than ever before and to a significant degree, you might say investors are taking the greatest amount of risk for the least amount of potential return in history. In other words, if there was ever an example of “reward-free risk” this is it. Taking In The View