In my last piece, I wrote that stock market valuations are currently at the same level they were when Warren Buffett, in November 1999, wrote his famous op-ed for Fortune magazine explaining that investors would inevitably be disappointed by returns over the coming decade. The stock market actually declined 30% over the following 10 years. “Disappointed” was actually an understatement as investors were downright despondent (which set up a wonderful opportunity to be greedy).

In fact, when looking at median valuations in today’s market, stocks are even more overvalued than they were at the peak of the internet bubble, some 3 or 4 months after Buffett’s piece was published. Considering valuations are roughly equivalent, or even worse than back then, what are the odds that we see another “lost decade”?

This is actually fairly easy to answer. The valuation indicator we looked at in the last post, total stock market capitalization in relation to Gross National Product, has actually been 83% negatively correlated to future 10-year returns dating back to 1950 (high valuations mean low forward returns and vice versa). Based on this correlation, this measurement of valuations, Buffett’s favorite, currently forecasts an annual return over the coming decade of about -0.88%. Yes, that’s losing almost 1% per year over the next decade – the very definition of a lost decade, even if it’s not quite as bad as the 1999-2009 period. Now there certainly is a possibility that stocks do significantly better than that dour forecast but it’s not very likely, at least not from a historically-informed perspective. (I should note here that other measures that are very highly correlated to future returns essentially agree with this one, as well.) This is why some of the most respected firms in the world, like GMO and Bridgewater, are informing clients of this very same fact.

And if I were forced to take the over/under on a 0% forecast over the next decade I would take the “under” for one simple but significant reason. The decade following Buffett’s op-ed saw stocks decline 30% but the Fed recently published research suggesting the decline from today’s level could be even greater than that simply due to demographics. Their study implied a decline of closer to 40% was very possible, if not probable.

The thesis suggests that equity valuations will be under pressure until 2025 as baby boomers age and reduce exposure to risk assets. Intuitively, this makes sense. During their peak earning years, the baby boomers poured money into the stock market driving the greatest equity bubble in history. As they now enter their later years the demand for equities, or lack their of, from this generation could have the opposite effect.

A chart from Ned Davis, in his terrific book “Being Right Or Making Money,” shows that this is not just theory. The chart below plots equities alongside births in the United States shifted forward 46 years (to the beginning of peak earning age). Clearly, over the long-term, equities benefit or suffer based simply on the general demand from the relative size of a given generation. Demand, as evidenced by births, has been waning since 2005. Another plunge in births begins right about now and looks to bottom sometime after 2020 before picking up again in 2025. 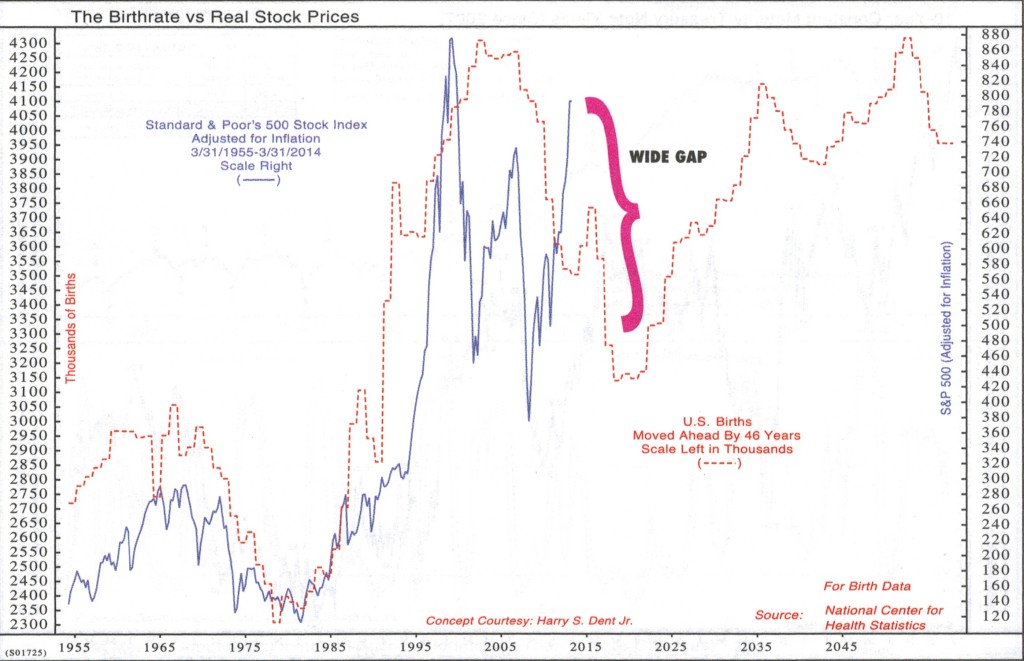 At best, equity returns over the coming decade will simply reflect earnings growth, assuming valuations can remain elevated. Historically, this has averaged about 3.8% over time. At worst, valuations will revert to an undervalued state and stocks will decline about 40% or more, as the Fed study suggests. Either way, the odds for another “lost decade” in the stock market are far higher than most people currently believe.