The True Cost of Financial Advice

jessefelder January 31, 2012
So I recently explained why a broker is not fit to be an adviser. I’d like to now take the next step to show why you shouldn’t even hire the typical financial adviser.

As opposed to a commission-based broker relationship, a financial adviser charges a flat fee usually in the range of 1% to 1.5% of the assets they manage. This is better than paying commissions because it doesn’t incentivize the adviser to churn your account or recommend overly expensive products like most annuities.

However, the typical adviser will put your money into actively managed mutual funds that charge an average of 1.5% of the assets in their care. All in then you’re going to be paying close to three percent per year for “advice.” On $100,000 this amounts to a mere $3,000 per year but when you have a timeframe of 10, 25 or even 40 years this $3k can explode into $3 million in true costs.

Let me explain: It’s a well-known fact within the industry that the vast majority of actively managed mutual funds underperform the major indexes by an average of 2% per year, year after year, mostly due to their higher cost. Ironically, this underperformance is the fruit of the “advice” you’re paying for. All in, then, your true cost is not 3% but 3.5% per year (1.5% to your adviser and 2% in after-fee underperformance).

Einstein said, “compound interest is the eighth wonder of the world. He who understands it, earns it. He who doesn’t, pays it.” I wouldn’t be surprised to find out he learned this lesson from analyzing the true cost of his financial adviser. 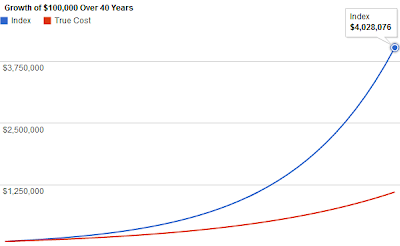 Read: Empower Yourself and Be Your Own Financial Adviser
Uncategorized No Comments
Next Post

Just for the News Junkies

Just for the News Junkies