“Technicians are all agog today about a triangle pattern in the S&P 500 that could mean a big breakout to the upside.” –Wall Street Journal

“The S&P 500 has formed a ‘triangle’ pattern, a sign to analysts who study charts that the rally is about to resume after the benchmark gauge for U.S. stocks rose as much as 20 percent last month.” –Bloomberg/BusinessWeek

My friends over as Aspen Trading yesterday drew my attention to the fact that the chart pattern below has been getting plenty of mainstream attention of late as evidenced by the quotes above. 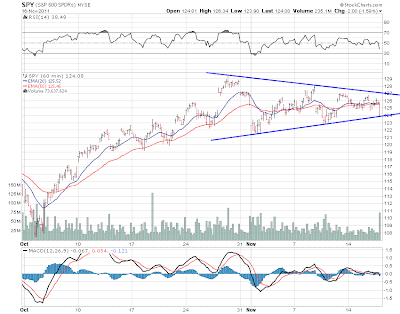 First, it is rare for the WSJ or the FT (Financial Times) to comment on technical patterns.  Second, as Joe Granville stated many years ago, “If it’s obvious, it’s obviously wrong.”.  It does not get more mainstream then having this pattern highlighted in the WSJ.  It does not mean it is invalid or won’t play out, one has to wonder if the triangle will even play out or if it does it will likely morph and throw a few curve balls at us first.

Or in the words of Bob Dylan, “All of the people can’t be all right all of the time.”

The Power of “New Retail”

The Power of “New Retail”