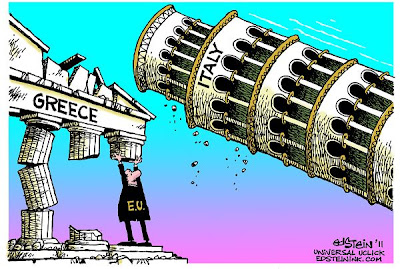 So we get a couple of new governments in Greece and Italy that will implement austerity programs in their respective countries and the Euro crisis is solved! The stock market surges and things are swell again for equity investors… until they aren’t.

And it seems to me that the risk that things aren’t as swell as Mr. Market seems to think is very real. The Economist comes to a similar conclusion:

I have been examining and re-examining the situation, trying to find the potential happy ending. It isn’t there. The euro zone is in a death spiral. Markets are abandoning the periphery, including Italy, which is the world’s eighth largest economy and third largest bond market. This is triggering margin calls and leading banks to pull credit from the European market. This, in turn, is damaging the European economy, which is already being squeezed by the austerity programmes adopted in every large euro-zone economy. A weakening economy will damage revenues, undermining efforts at fiscal consolidation, further driving away investors and potentially triggering more austerity. The cycle will continue until something breaks. Eventually, one economy or another will face a true bank run and severe capital flight and will be forced to adopt capital controls. At that point, it will effectively be out of the euro area. What happens next isn’t clear, but it’s unlikely to be pretty.

The contrariain-minded money managers over at Comstock seem to agree:

We see no easy way out of the current turmoil.  The result of enough fiscal austerity to relieve the debt pressures is a severe recession or depression.  Historically, independent nations undergoing austerity have accompanied the policy with monetary ease and a devaluation of their currency.  This is something EU members cannot do as they share a common currency and therefore do not run their own monetary policy.  Default would cause havoc in the EU banking system that holds a significant share of the sovereign debt.  A bailout would require at least two trillion euros, a sum that no one wants to pay.  And breaking up the EU would cause major turmoil in global financial markets and economies.

Like these guys, I just can’t see the painless solution that the stock market seems to be lauding right now. If anything, it seems that the likelihood of an unpleasant endgame is only increasing. In fact, Jim Rogers told CNBC this week that he puts this probability at 100%. He further said that the coming crisis will make the previous ones seem like child’s play.

Below is the video of an interview Rogers gave a week ago on the subject: