jessefelder November 3, 2011
I’m a little embarrassed to be quoting Shania Twain but the album did sell more copies than any Queen, Nirvana or Bruce Springsteen record and it fits what I’m about to discuss…
…which is the stock market. Just about a month ago I penned a piece arguing that the stock market was damn cheap. Its was. Since then, it’s rallied nearly 20% making it that much more expensive.
Such a massive rally in such short a time frame makes me much less bullish. You know what they say about bear market rallies. There are a couple of other factors I’m looking at, as well.
Let’s take a look at the big picture first: 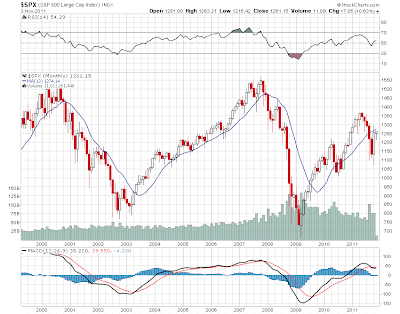 Above is a monthly chart of the S&P 500 Index. Clearly for the past decade that 13-month moving average has acted as pretty good support and resistance. We’ve recently broken below it and are now testing the underside.

On a weekly timeframe the index looks like it could be forming a loose head and shoulders top. The moving averages have also crossed down for the first time since this bull market began in 2009 – a red flag for me.

The daily chart shows us that the index remains below key resistance at 1260, a level which acted as support for most of the year prior to the latest selloff. The index is also looking up at the 200-dma, another key level overhead. So let’s look at one more time frame:

The chart above plots the index on an hourly time frame. It shows another potential head and shoulders pattern with the right shoulder now testing that 1260 resistance line I mentioned above.
All of this is not to say I’m bearish here. However, I am reducing my equity exposure which feels like the only prudent thing to do.
Uncategorized No Comments
Next Post

Those Greeks Love Their Porsches

Those Greeks Love Their Porsches