The Rationale of a “Balance Sheet Recession”

Barry Ritholtz makes a great point today in a piece titled, “Why Aren’t Banks Lending? They Are Being Rational”:

[The big] banks STILL have to much debt, too little capital. They [sic] books are festooned with bad loans, which, thanks to our corrupt Congress, they no longer have to disclose appropriately. Thanks to Mark-to-Make-Believe, they can pretend these assets are worth near what they paid for them. In reality, they cannot sell them even at 50% off.

Lending money is a risky business; there is the possibility of loss. Under-capitalized banks cannot take that chance. By not lending, their capital base goes up. IT is the rational thing to do from their perspective.

Rather than engage in traditional money lending, these banks have decided to simply borrow from the Fed at 0%, and make risk free loans to the Treasury at 3%.

I would only make this addendum: “Why Aren’t Consumers Still Borrowing? They Are Being Rational.”

Consumers have been binging on credit for a very long time now. They’ve only started to save more but as the following chart (from TBI) shows, they still have a very long way to go to get back to reasonable levels of debt: 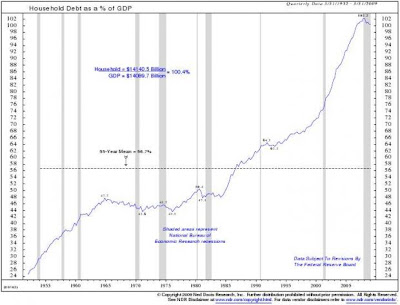 The combination of the two, banks not lending and consumers not borrowing, is the foundation for a deleveraging cycle that will pose a major challenge to the economy over the coming years.