The chart above, courtesy of the Bratton Report, shows the awesome decline in Bend home prices over the past few years. We’ve now seen home prices here in town fall over 40%!

Today the Wall Street Journal ran a piece arguing that, “the relative cost of owning versus renting is swinging back in favor of homeownership in some U.S. markets, buoyed by several quarters of sharp declines in home prices.” Here are the details:

After the crash we’ve seen in local home prices this should come as little surprise. However, it doesn’t mean that prices won’t continue to fall.

In fact, according to the measure used by National City (famous for calling Bend the most overpriced market in the country), despite the dramatic decline we’ve already witnessed home prices have another 15% to fall before they become fairly valued: 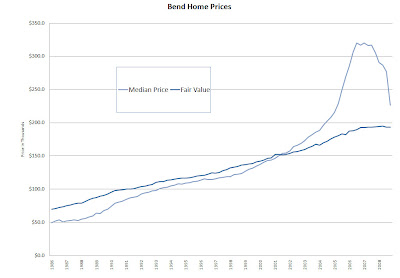 I guess this is what Mayor, Oran Teater meant when he told the Bulletin over three years ago that, “it used to be that when the state caught a cold, Bend caught pneumonia.” What he didn’t anticipate is that it didn’t just “used to be” like that; it still is. The more things change the more they stay the same.

Ultimately, it makes more sense to buy versus rent today than it did a couple of years ago. There are certainly attractive opportunities out there in the local market right now. However, I still don’t think it makes sense to anticipate a bottom any time soon.

Bank of Obama: Pay to the Order of Jesse Felder

Bank of Obama: Pay to the Order of Jesse Felder