Stocks are selling off this morning in a fashion reminiscent of late last fall. Blame it on that drunk at the G7; blame it on the Keebler elf but the cause doesn’t really matter for our purposes.

What I’d like to look at, specifically, is the technical similarity to the selloff of October and November of last year. The chart below shows the S&P 500 and, below it, the Volatility Index. 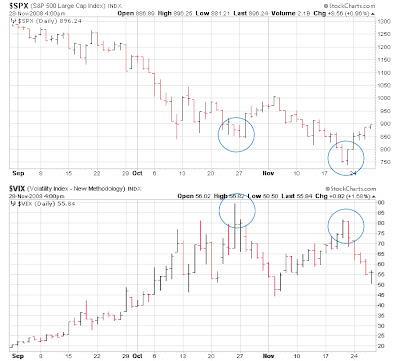 Typically, as stocks make new lows, the VIX moves in the opposite direction and makes new highs. However, last November when the S&P took out its October lows, the VIX did not make a concomitant new high. That divergence led to a significant rally.

Similarly, as stocks make new lows for 2009 today, the VIX is once again diverging in failing to make a new high.

This is a bullish development and it’s pretty obvious with this renewed selling pressure that the bullish path right now is “the one less traveled by.” In other words, it’s a contrarian’s playground.

Will Smith on Success

Will Smith on Success