It’s hard to believe that only six months ago the price of oil was nearly $150 per barrel when everyone and their Grandma was bullish. To me, it feels like it was only yesterday that analysts were predicting the commodity would soon double in price yet again.

Alas, oil has dropped over 75% since it saw its summer-time peak and now it feels, at least to me, that sentiment has shifted too far in the opposite direction.

It’s always interesting to me to hear people who were bullish on a security at x, turn bearish on the same security at 1/2 of x. It’s not at all like the real world where people go ape$#!+ over drastically reduced sales prices.

So the analysts that were predicting $300 oil are now predicting prices in the teens. I, on the other hand, think oil is looking pretty darn cheap right about now.

The chart below is an update of one I posted back in July when first began to breakdown. I was bearish at the time but I never imagined it would fall so far so fast. 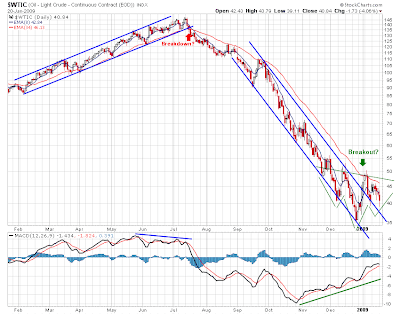 As you can see on the chart, oil has now broken its downtrend in a mirror image of its break last summer. It also seems to be forming an inverted head and shoulders pattern which suggests prices may be headed back to the $65 area, perhaps just in time for the summer driving season.

The Bulletin: To Report Or Not To Report

The Bulletin: To Report Or Not To Report