Congress to Detroit: “Make It Up In Volume! We Do.”

If there’s anything Bob Lutz knows it’s what doesn’t sell. He’s spent a lifetime in Detroit watching the big three build unprofitable cars people don’t want. And now, as Vice Chairman of GM, he’s watching it suffer the consequences as it faces bankruptcy.

Congress, on the other hand, has no clue. This is evidenced by the fact that the bailout plans would have forced Detroit to try to, “make it up in volume.” From The Wall Street Journal:

Leave it to Bob Lutz, GM’s voluble vice chairman, to puncture the unreality of the auto bailout he himself has been championing. In an email to Ward’s Auto World, he notes an obvious flaw in Congress’s rescue plan now taking shape: The fuel-efficient “green” cars GM, Ford and Chrysler profess to be thrilled to be developing at Congress’s behest will be unsellable unless gas prices are much higher than today’s.

“Very few people will want to change what has been their ‘nationality-given’ right to drive big and bigger if the price of gas is $1.50 or $2.00 or even $2.50,” Mr. Lutz explained. “Those prices will put the CAFE-mandated manufacturers at war with their customers — and no one will win in that battle.”

Translation: To become “viable,” as Congress chooses crazily to understand the term, the Big Three are setting out to squander billions on products that will have to be dumped on consumers at a loss. 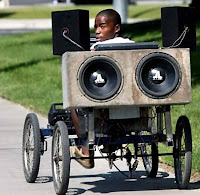 So the bailout, essentially, would have heaped failure upon epic failure. Then again, that is the one thing the government is really good at: throwing good money after bad.

Unlike GM, however, congress suffers no consequences for its failures. And, in a way, I guess they really do, “make it up in volume;” the national debt has been the only, recession-proof, growth industry for the past century.