There has been a fair amount of chatter lately about oil prices losing another 50% or so from current levels. Bloomberg reported last Friday:

Bets that oil for January delivery will fall below $20 a barrel were the most active options contract in electronic trading today, a day after Merrill Lynch & Co. said oil may drop to less than $25…

January $20 puts rose 3 cents to 4 cents a barrel, or $40 a contract, according to electronic trading data as of 3:25 p.m. on the New York Mercantile Exchange. Volume was 743 contracts. Floor trading settled unchanged at 1 cent a barrel, or $10 a contract. Today’s pit volumes will be released Dec. 8. The contract didn’t trade yesterday, according to data today…

Yesterday, The Los Angeles Times reported that some analysts even expect gas may soon be prices solely in pennies:

Pump prices headed toward five-year lows nationally and in California, the Energy Department said Monday. And despite a bump in crude prices, some analysts say the slide might not end until oil hits $25 a barrel and gasoline drops to $1 a gallon or below…

Tom Kloza, chief oil analyst for the Oil Price Information Service in New Jersey, said that more relief was probably on the way. Kloza noted that California wholesale gasoline prices were running at about 99.5 cents a gallon Monday.

As I wrote back when oil was approaching $150, oil prices have been roughly halved during every recession. This recession is no different; oil has been more than cut in half. 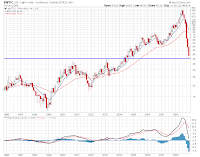 But back when oil was up near $150, despite the fact that everyone with a brain recognized we were in recession at the time, many analysts were predicting oil would see $250 by year end. Now, with oil down 70%-plus to roughly $40, the same analysts are calling for an additional 50% haircut? Does anyone else find this more than a bit ironic?