Is Helicopter Ben Walking the Talk? 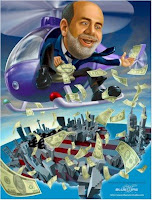 Yardeni is calling for the central bank to launch a program that Chairman Ben S. Bernanke discussed publicly in 2002, before he took the Fed’s helm. If the economy ever faced a serious deflation threat, and the Fed had already cut short-term rates to zero, policymakers could turn their focus to directly influencing long-term rates, Bernanke said at the time.

This was the famous “Helicopter Ben” speech, for the imagery of a helicopter drop of money into the economy.

Under Bernanke’s plan, the Fed would try to manipulate long-term rates by buying long-term Treasury securities for its own account. That’s what Yardeni proposed in an email he sent to clients late last week.

Well it looks like somebody at the Fed was listening. The 30-Year Treasury Bond has gone simply parabolic over the past month as some major buying interest has obviously entered the market: 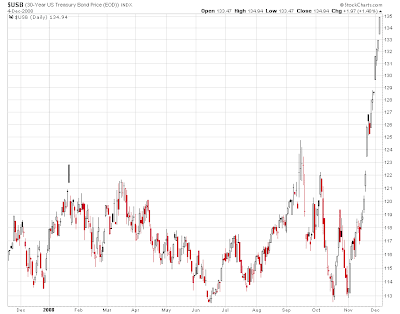 The yield on the 10-Year Treasury, the basis for most mortgage rates, has now fallen all the way to a measly 2.6%. Mortgage rates have fallen but not nearly to the same degree. This is probably the impetus behind the new bailout for “Main Street.”

The Fed may have another reason for manipulating the market for long-term Treasuries, however. Ironically, Ed Yardeni is widely known for popularizing the so-called “Fed Model” which compares the yield on long-term Treasuries to the earnings yield of the S&P 500.

So the recent runup in bond prices, very possibly at the hands of the Federal Reserve, has made stocks look extremely attractive, at least according to the Fed Model. And, with psychology so weak and so many eyeballs on the stock market lately, this may just be exactly what Helicopter Ben had in mind.

FED Model, Earnings Trends; Some Context for it
Normxxx
suite101.com