Charts of the Day: Symmetry

Since Election Day the markets have sold off roughly 15% in only 6 trading days. I wrote last week that I was watching the indexes to see if they could hold key fibonacci retracement levels.

With today’s selloff most of these levels were lost. However, the retracement in the indexes of the bull move leading into the election shows interesting symmetry here: 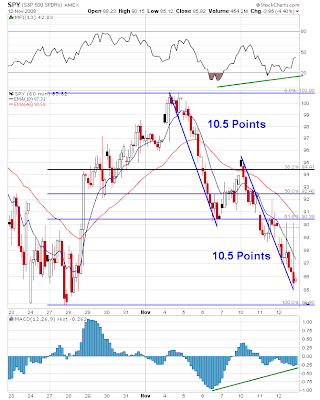 As you can see in the chart of the S&P 500 ETF above, the two legs down are now almost perfectly symmetrical. In addition, each wave is roughly equal to 0.618 (a key fibonacci ratio) of the prior bull move.

The chart below is a similar look at the Nasdaq 100 ETF which is showing a virtually identical pattern:

Ultimately, if the markets rally from here these bullish patterns will look pretty prescient. And even if they don’t rally, it’s still interesting stuff to study.