Foreclosures On Fire (and Driving Sales) 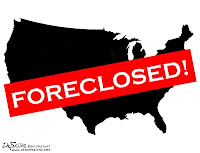 Yesterday we learned from the Wall Street Journal that California home sales were on fire, mainly due to the proliferation of distressed sales. Today we learn that, indeed foreclosures are also on fire. From USA Today:

The number of homeowners ensnared in the foreclosure crisis grew by more than 70% in the third quarter of this year compared with the same period in 2007, according to data released Thursday.

By the end of the year, RealtyTrac expects more than a million bank-owned properties to have piled up on the market, representing around a third of all properties for sale in the U.S.

While the boost in sales is a positive sign for the beleaguered real estate market, the fact that 3 million homeowners per year are losing that status is just plain sad.

Source:
U.S. foreclosure filings up 71% in the third quarter
The Associated Press
via USAToday.com
October 23, 2008