“The market can say irrational longer than you can stay solvent.” -John Maynard Keynes

This quote is one of the most well-known in the world of finance. Alas, the guys at Amaranth and SemGroup must not get out much.

Amaranth Advisers was a hedge fund that blew up because they simply took too large a leveraged position in the Natural Gas market. It is very important to note that the fund didn’t blow up because it took the wrong side of a trade; no, it blew up because it was too levered and couldn’t stay solvent in the face of an increasingly irrational market.

Long story short: Natural Gas prices declined further than the fund managers imagined was possible and they got caught with their pants down. Liquidating their positions pushed the price down even further and ultimately created a multi-year bottom in the price of that particular commodity.

Fast forward to today. The oil market (Natty Gas’ close cousin) rips higher this year, so much so that it’s the talk of the nation. It makes a recent high just under $150 per barrel and then sells off in dramatic fashion. 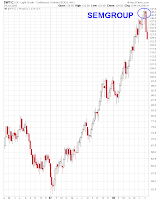 Now we hear of another quasi-hedge fund blowing up – again not because they took the wrong side of the trade but because they simply could not afford to hang on to the position – they couldn’t “stay solvent.”

SemGroup, an “oil-marketing firm” (whatever that means), was short oil and over-leveraged, of course. When the price continued higher than they imagined possible the company was forced to cover some of their short positions, pushing the price even higher, essentially sealing their own fate. It’s the mirror image of Amaranth and just as its undoing marked the bottom of the Natural Gas market, SemGroup’s undoing may very well mark a multi-year top in the oil market.

He’s no fat lady but Keynes is singing both funds a serenade from the grave: