Smart Money Bets On An Oil Peak (Not Peak Oil)

Bloomberg reports today that the “smart money” is now betting heavily on an oil peak (not peak oil):

Refinery executives are buying more of their own stock than at any time since 2000, prompting investors to bet that a retreat in oil will boost profits and reverse the biggest share decline in a decade.

Executives at 10 refining companies snapped up $2 million of their shares last month, twice what they sold, according to data from the Washington Service, which analyzes insider patterns for 500 institutional clients. That helped raise the average level of purchases to the highest in eight years… 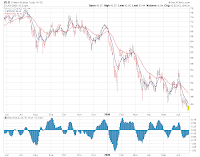 Insider activity has been one of the most successful indicators I’ve tracked over the past decade. And money just don’t get much smarter than Bruce Kovner and Ken Griffin.