The Piggies Are Looking Bullish

Uber-contrarian, Doug Kass, yesterday validated my recent thesis on financial negativity writing, “quite frankly, I sense a growing likelihood that Capitulation (with a capital C) has emerged in the past week for bank stocks.” 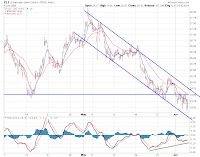 Standard and Poor’s (those wonderful folks who ignored the housing and subprime problems in 2005-2007 until it was too late) downgraded several investment banks on Monday. From my perch, Standard and Poor’s move was valueless to equity investors, was instituted very late in the cycle and might have served to put a bottom in the financial sector.

The media (those wonderful folks who, similar to the rating agencies, ignored the housing and subprime problems in 2005-2007) now appear to be universally bearish on bank stocks…

But he also likes the fundamental case for buying the banks right now writing, “bank stocks have never been so cheap, and their core profit generators (deposit growth, loan growth, spreads and net interest income) remain intact and will, in the fullness of time, turn more positively.”

Today, another favorite analyst of mine, Jason Goepfert, makes the technical case for an imminent bounce in bank shares:

Going back to 1993, the index was up nine of ten times after other occurrences, averaging a gain of just under 6% after two weeks. Two of them led to another 1% down day the next day, but obviously recovered over the ensuing week(s).

I’m not real tempted to bottom-fish the sector, but this kind of waterfall selling pressure, at least over the past 15 years, has led to consistent and substantial rebounds, which would almost certainly lead to a pop in the broader indices…

Add the fact that the chart shows some serious inverted dandruff and it looks like these piggies are going to moo. 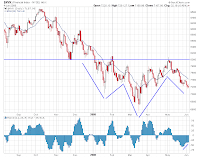 Chart of the Day: “Caught in the Crossfire”

Chart of the Day: “Caught in the Crossfire”