The magazine cover indicator is a good example. The theory goes, by the time something’s hit the front page of Time Magazine (or its equivalent) it’s already played out. (Here’s the indicator in action.)

Well I propose a new sentiment indicator based on bubblevision’s own, Jim Cramer. My theory goes like this: when the market’s biggest cheerleader is down in the downy dumps, it’s time to buy stocks (and vice versa). I call it the, “Sad Clown” indicator.

So let’s take a look at where the indicator currently stands:

In addition to falling ratings for his Mad Money television show, so far this year, Cramer’s thestreet.com has seen it’s stock cut in half: 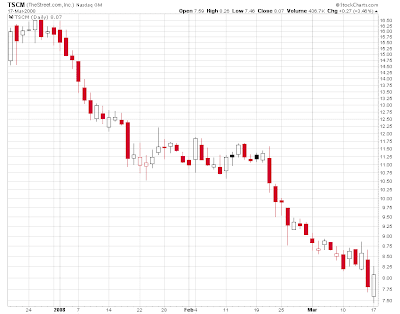 He’s been ridiculed on the air by his colleagues at CNBC:

(If you don’t already know, Bear Stearns is essentially insolvent.)

This may be just about as bad as it can possibly get for America’s Favorite Stock Market Clown – and to me that’s a pretty strong buy signal.
LIV