Bank of the Cascades, along with many of its fellow financials and for good reason, has been just crushed this year. After breaking down again this fall, the stock has now been cut in half from the highs it saw roughly a year ago. The chart below is an update from the one I posted the last time I wrote about the stock: 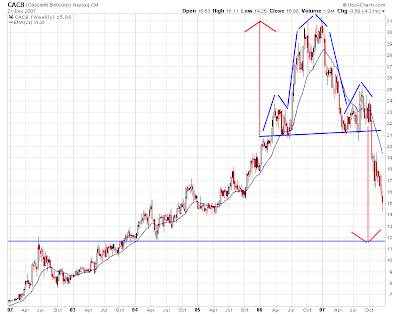 Although it hasn’t quite reached my target area there are signs it may be ready for at least a counter-trend bounce.

Technically, the daily chart looks oversold. While the stock has recently made new lows, Money Flow, MACD and DeMarks (some of the most potent technical tools in my tool box) have diverged:

In other words, the waves are still coming in but the tide is starting to go out. Friday’s bullish reversal (making a new low and then closing positive) is also a sign that the stock may be ready for at least a breather.

In addition, the weekly chart shows that this latest move down has now reached symmetry with the stock’s first move off its highs. (I subscribe to the idea that the market, like any natural system, strives for symmetry in a multitude of subtle but visible ways.) 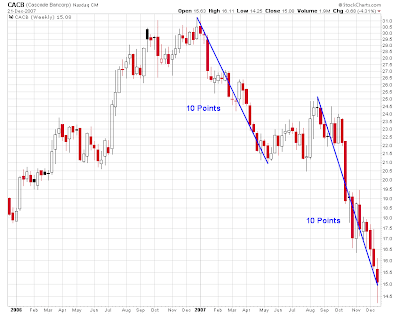 Finally, the short interest in the stock is a huge 32 days. It may only take the slightest bit of buying interest to spook the shorts into buying back the 5 million shares they have sold. Add in the fact that insiders have been judiciously buying over the past couple of months and you’ve got a pretty explosive recipe. Indeed, some of the most vicious rallies I have ever witnessed were born this way.

This doesn’t change the fact that the bank’s financials are deteriorating and will, in all likelihood, get much worse over the next few quarters. All I’m saying is this dead cat may have just hit a trampoline.
LIV

The Markets Are Screaming, “Inflation!”

The Markets Are Screaming, “Inflation!”