The last time I wrote about the VIX, I noted that the 12.5 level was a key line in the sand. The fact that it could not break below that despite the market rising to new highs was a glaring bearish divergence.

Now, a new level is telling us something just as important. As the chart below shows, during this most recent bull market (over the past 4+ years) the VIX has pretty much stayed below the 20 level. In fact, the last time the Index spent any real time above 20 was during the last bear market (March, 2000 to March 2003). With this latest weakness in the stock market, the VIX has convincingly broken 20 again, which suggests to me we may be witnessing more than a mere correction: 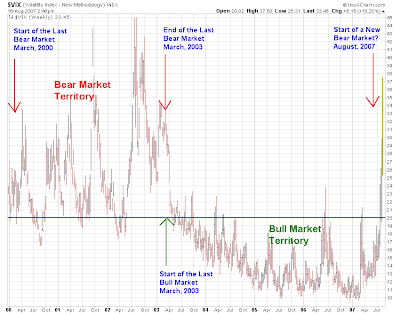 The bear market may, indeed, be coming out of its 4-year hibernation but, for right now, I believe this selloff may be reaching a climax.

Less than 10% of the stocks trading on the NYSE now trade above their 50-Day Moving Average, a historically rare occurance suggesting the market is oversold:

New 52-Week lows on the exchange are also reaching an extreme level.

In addition, the total Put/Call Ratio is making all-time highs. In other words, there has never been a time where more puts were bought (traders betting on a decline) relative to calls (traders betting the other way):

This contrary indicator is sending its most bullish reading ever.

There are also some signs in the S&P that it may be reaching important support. We are now testing the March lows in the index (technical support on the chart) at the same time this second wave of selling is nearing symmetry with the first wave (both 128 points). 1375ish on the index, then, is another line in the sand that bears watching:

Finally, another market is showing signs that panic has overtaken the financial markets. Traders are rushing into the safety of Treasury Bills at breakneck pace. According to Bloomberg, the yield on the 3-Month Treasury Bill has fallen harder (prices rallied) than any time in nearly 20 years.

As Jimmy Rogers says in the classic book Market Wizards, “just about every time you go against panic, you will be right if you can stick it out.”
LIV

Bank of the Cascades is WAY too “Modest”

Bank of the Cascades is WAY too “Modest”