There’s a new article making the email rounds that compares quotes from Hillary Clinton and Milton Friedman. The first and most intriguing quotes are these:

“The unfettered free market has been the most radically destructive force in American life in the last generation.”

“What most people really object to when they object to a free market is that it is so hard for them to shape it to their own will. The market gives people what the people want instead of what other people think they ought to want. At the bottom of many criticisms of the market economy is really lack of belief in freedom itself.”

It turns out, however, that Mrs. Clinton was misquoted. The real quote is taken from this interview:

LAMB: There’s a quote here. I want to ask you if you agree with this. This is from Alan Arenhault, author of “The Lost City” — you put it in your book. “The unfettered free market has been the most radically disruptive force in American life in the last generation.”

CLINTON: I believe that. That’s why I put it in the book. [The book is Clinton’s, “It Takes a Village: And Other Lessons Our Children Teach Us.”]

The only real difference in the two quotes is the word, “disruptive,” in the real quote versus the word, “destructive,” in the false one. At first glance, it seems this is a very big difference. Suggesting free markets are destructive implies that Clinton feels they are a bad thing. The false quote, then, essentially suggests she is anti-capitalist.

But on further examination, I, as a staunch pro-capitalist, can heartily agree with even the use of the word, “destructive.” The free markets are a very powerful destructive force, in a good way. “Creative destruction” is at the heart of a vibrant capitalist economy. Free markets foster the innovation that defines the American success story.

Mrs. Clinton was obviously thinking of this when she gave the interview as she is well acquainted with success in the free markets. 10,000% annualized returns are a testament to her commitment to capitalism. As traders and Americans, we should all strive to follow her example. Speaking of which (witch?), when do you suppose Jack Schwager will profile her? 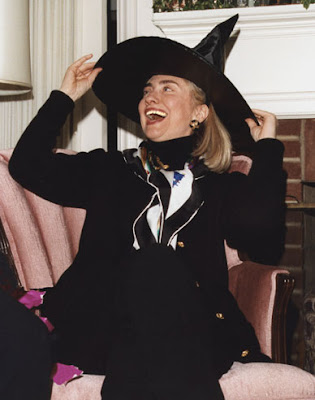