Break on Through (to the Other Side)?

So the S&P 500 (SPX) broke out to a new 7-year high yesterday. Still, the volume (at the bottom of the chart) wasn’t convincing enough for me to justify the word “breakout.” Maybe, “floatout?” “Glideout?” “Breakouts,” if they are to be believed, should be accompanied by a breakout in volume. (Think Jim Morrison.) 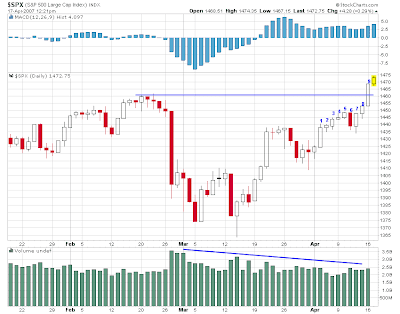 As I suggested on Sunday night, we did get a completed TD Sequential sell setup yesterday (the 9 on the chart above). The VIX is still above its March lows (below) and is very close to tagging the lower bollinger band. 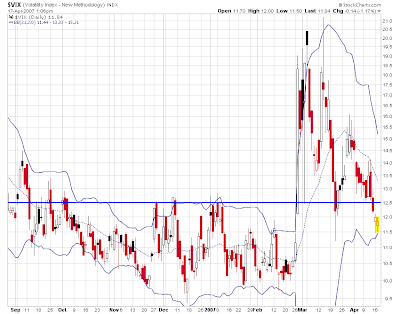 I also like to look at the VIX relative to its index, the S&P 100 (OEX). The ratio of the VIX to the OEX is also looking pretty stretched here and ripe for a reversion.

Perhaps even more troublesome is that most of the other stock indexes are failing to confirm the news highs in the SPX. The Russell 2000 Index of small capitalization companies is the one I mainly look to to confirm the action in the large capitalization-focused SPX. From the chart below, the Russell has not broken out and looks vulnerable to putting in a double top.

The Nasdaq Composite has also failed to follow the SPX to new high ground and looks vulnerable to a double top.

Important sectors like the financials, retailers and semiconductors are all lagging the SPX.

All of these warning signs tell me to be wary of a fakeout. If the SPX were to soon retreat below the February highs the bears would be eager to put an RIP on the “breakout.”
LIV

“Learning to be a landlord” before preschool?

“Learning to be a landlord” before preschool?