The housing industry lost as many jobs in the first couple of months of 2007 as it did during all of last year. That’s the news from Challenger, Gray & Christmas. Monster Worldwide’s stock price is reflecting this weakness (that and the fact that they announced their North American jobs business is slowing. I wonder why…): 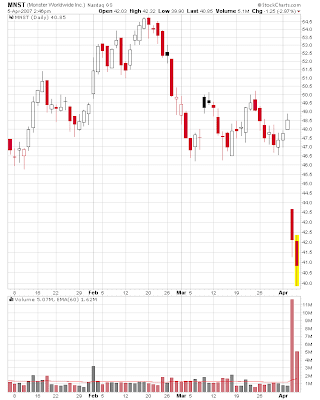 In fact, Monster and the real estate market have much in common. They both are very jobs dependent. They are also great indicators for the health of the overall economy. Ah, and they have both experienced massive bubbles. The difference is that Monster has already worked off its excesses:

The real estate market is only now beginning to.
LIV