The latest issue of Forbes contains an interesting article on Apple (ticker: AAPL) and the soon-to-be-released iPhone. Although I’ve been wrong on the stock for some time now, my feeling about Apple has been that, like trendy retailers that regularly hit and miss with their seasonal designs, Apple is due for a miss. And the iPhone has a very good shot at being a complete airball. The meat of the article follows:

“Even if the growth in smart phones could support the sale of 10 million iPhones by 2008, Apple’s own strategic decisions could easily prevent the company from meeting its target. The most limiting of these is its decision to offer the product only through AT&T’s Cingular Wireless service. Cingular may be the largest service provider in the U.S. with nearly 70 million cellular/PCS subscribers, but the iPhone will likely only attract new customers or existing customers whose contracts are expiring.

“Additionally, consumers under contract with the other major carriers such as Verizon, T-Mobile, owned by Deutsche Telekom, and Sprint Nextel, will have to wait until their contracts expire or pay an early termination fee to switch to Cingular in order to get their hands on the iPhone.

“Further limiting the iPhone’s viable market is its price relative to those of competing products. One of the key reasons for the strong growth in smart phone sales among consumers in 2006 was the availability of lower, more affordable models, whether the result of prices cuts, higher subsidies by service providers or greater use of rebate programs. Indeed, many of the current smart phones available sell for roughly half what the iPhone is expected to cost at launch with a two-year contract.

“Apple may also be underestimating competition from rival smart phone makers, such as Nokia, Motorola, Palm and Research in Motion. The fierce level of competition even before the iPhone announcement forces market players constantly to improve products and enhance features.”

There is no doubt that Apple will sell a whole lot of iPhones. Their fiercely loyal customer base will see to that. Whether it will be enough to satisfy Wall Street is another question altogether. A long term chart of the stock looks very bearish to these skeptical eyes: 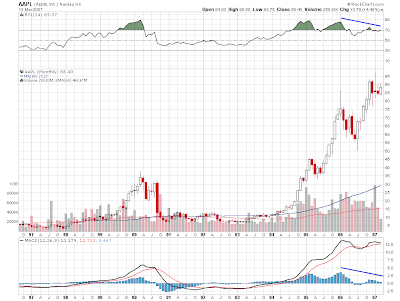 Then again, it could never be as bad as iRack.
LIV