The big news in the markets over the past couple days is that the rate of the 10-Year Treasury Note is breaking out above the high made last November. 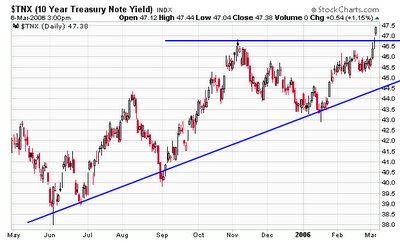 The short-term trend is now clearly up. What’s more important to me, however, is the longer-term trend.

Over the past few years, rates have been declining fairly steadily. This, as everybody knows, has been a significant boon to the Real Estate market in addition to other investment classes. But it now looks like this downtrend is clearly broken. 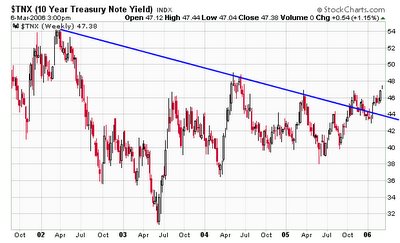 Looking at an even longer-term chart, one can see that the downtrend in place for the past 15 years is now being tested. (Rates actually peaked in 1981 so the trend is really approaching a 25-year tenure). 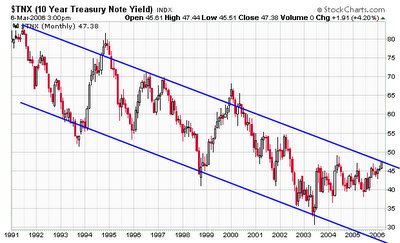 As the 10-year T-Note sets the standard for the 30-year mortgage rate, this has obvious implications for the real estate market (they’re not good). It has implications for all other types of asset classes as well.

Conversely, when rates peaked in 1981 and then began to decline, alternative asset classes, namely stocks, became relatively more attractive and a 25-year bull market was born. It was, in fact, the buying opportunity of a lifetime.

This trend, however, is clearly in jeopardy. For this reason, there is a strong chance that 2005-06 may mark the selling opportunity of a lifetime.
LIV

Now To The Point… Finally

Now To The Point… Finally